Tearoffs are Objectspace's gallery catalogue format of choice. A2 sheets that you can 'tear off' and take away. For Make/Use, we had a series of five tearoffs. This is the fourth.

The Make/Use project has provided a platform for genuine interdisciplinary practice. The research team co-developed the Make/Use system, which extends Holly McQuillan's zero waste fashion research, looking to encode fabric patterns with a wayshowing system that enables user modification. This design thinking exercise combined expertise around spatial cognition, visual communication, textile print, and the translation from 2D surface to 3D form. Each collaborator also developed elements of the project towards its public dissemination via the Objectspace exhibition and workshops, and the accompanying Make/Use catalogue and website.

Holly McQuillan [GARMENT]:
Holly’s Make/Use project began as part of the global research consortium Local Wisdom, where researchers examined the re-conceptualised of fashion consumers and users, and explored the design implications of this reframing. Holly’s background as a zero waste designer informed her exploration of what Zero Waste might look like, viewed through the lens of Use Practice. This first iteration of Make/Use used simple zero waste garment design and digital printing to explore User Modifiable Zero Waste Fashion. This has now been extended in scope and resolution through collaboration, first with Jen Archer-Martin and later with the rest of the Make/Use team.

Jen Archer-Martin [SPACE]:
Jen helped to instigate the wider collaboration, and contributed to the development of the Make/Use system and maker/user experience. This took the form of a series of cognitive tools, aids for making/using, and the design of the exhibition and workshops. The project aligns with Jen’s wider research, which seeks to promote human and ecological wellbeing through the design of places for meaningful experience, and more specifically the role of spatial design in facilitating deep learning. The activation of new behaviours and practices is already evidenced by the growing community of maker/users emerging from Make/Use at Objectspace.

Emma Fox-Derwin and Jen Archer-Martin [OBJECT/SPACE]:
Emma and Jen brought their skills as three-dimensional thinkers to the notion of 2D-3D transformation, excited at the potential this held for both fashion and other areas of design. The Make/Use exhibition furniture is considered the first phase of an ongoing furniture design exploration. While the main aim at this stage was to facilitate the exhibition and workshops, the furniture also explored the zero/minimal waste manipulation of flat sheet material via cutting/folding; and the creation of angular forms via rotation of cylindrical materials. These ‘clues’ to the understanding of core Make/Use concepts were embedded throughout the exhibition.

Greta Menzies [TEXTILE]:
Greta was instrumental in the translation of the Make/Use ‘wayshowing’ system into instructional surface pattern. Print motifs arose from an interest in democratic mark making, and are able to be replicated at home with simple tools and fabric paint. She also explored edging/joining solutions for the textiles, using latex, house paint, digital embroidery and needle felting. Greta was inspired by the truly collaborative engagement in the development of the Make/Use system, which challenges a more conventional ‘service provider’ model of textile design. Understandings gained from Make/Use are further informing her ongoing Master of Design research.

Karl Kane and Jo Bailey [GRAPHIC]:
As well as creating the dynamic Make/Use identity, Visual Communication Design researchers Karl and Jo helped to define and facilitate several core aspects of the project. Their approach centred around the core philosophy of Make/Use: making it accessible to all by democratising complex theories, methods and techniques. The resulting modular system formed a key component of the garment wayshowing system - the ‘route marker’ symbols - and also extended throughout the project's print, digital and spatial communications, expressing the ability of the Make/Use system to generate any number of artefacts from a simple underlying structure.

Bonny Stewart-MacDonald [PHOTO]:
In conceptualising the editorial photography for Make/Use, Bonny was inspired by the translation of something flat to a form with physical depth - a concept that resonated with her own design sensibilities. Bonny sought out domestic and industrial spaces that she could photograph to suggest this shift. Paired with her fashion portrait shots, these images create a conversation about clothing as a ‘space for the body to move through’, as Holly has described. Bonny has also documented Make/Use from development through to the exhibition and workshops.

Jason O’Hara [VIDEO]:
Jason developed and produced the Make/Use film and cognitive videos. For the film, he conceptualised a sequence that evoked the construction of the Make/Use garments, with a model enticing the garments to form around her while she dances. His production team used the latest in high-speed video camera technology and innovative thinking to capture a balance of edge and elegance. The Make/Use project’s zero waste philosophy is an extension of Jason’s ongoing research into humanity’s relationship with nature and each other.

THE MAKE/USE RESIDENCIES
The Make/Use residencies aimed to bring the live research process into the gallery, and allow Make/Use researchers and student designers to explore Make/Use concepts in relation to their own varied practices.

Holly McQuillan (fashion researcher):
As well as overseeing the residencies, Holly explored variations on two of the simplest Make/Use patterns - the t-shirt and the tube dress - testing possible permutations of form and material through using the same base pattern on different fabrics. Holly made two versions of the tube dress, one using a 3m long tube of silk georgette and organza, and the other, a heavy Merino Knit ribbing usually used for cuffs and necklines. Her t-shirt experiments involved spreading thick layers of house paint over a light-weight silk material to modify its behaviour, and using quilted fabric to exaggerate the rounded form on the back of the t-shirt.

Greta Menzies (textiles researcher):
Greta, a Masters student in textile design and collaborator on the Make/Use project, approached her week in residence at Objectspace as a chance to use the techniques and ideas she had gathered from the project to make some experimental garments. These included: a dress made from a tube of silk-cotton and a piece of mattress foam, a clown-like denim jumpsuit, a version of the Make/Use t-shirt embellished with paint, and a giant beast of a rug-tufted jacket. Greta also helped to lead two of the Make/Use workshops, in which she observed participants creating fresh, interesting iterations of the Make/Use designs.

Alana Cooper (fashion student):
In her residency, Alana experimented with the Make/Use trouser template. Using waste yarns from a textile manufacturer, she created the triangular shape of each trouser leg by quilting strands of yarn together with a wash-away stabiliser. The user-modifiable fabric, imperfect in its organic-looking machine ‘weave’, can be cut without fraying and then have additional yarns added in wherever the maker/user desires. This process of using textile waste to create purpose-made fabric for any zero waste garment pattern offers exciting possibilities for future iterations of Make/Use, and is something Alana hopes to continue to explore.

Isaac Dalkie (visual communication design student):
With little sewing experience, Isaac used his residency to test the Make/Use system’s viability for novice garment makers. Daunted at first by the scope of modification possibilities and flexibility in each pattern, Isaac soon realised that the lack of a ‘right or wrong’ method of making/using was extremely liberating. He found the experience of being pivotal in the creation of your own unique clothing deeply satisfying, and completed three successful garments. Isaac’s participation in and observation of Make/Use will be used to generate a feature for a journal of speculative design projects, as an exemplar of theoretical alternatives of future systems. 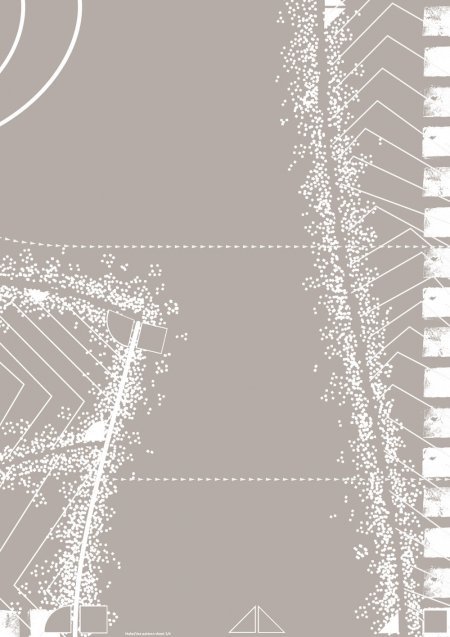